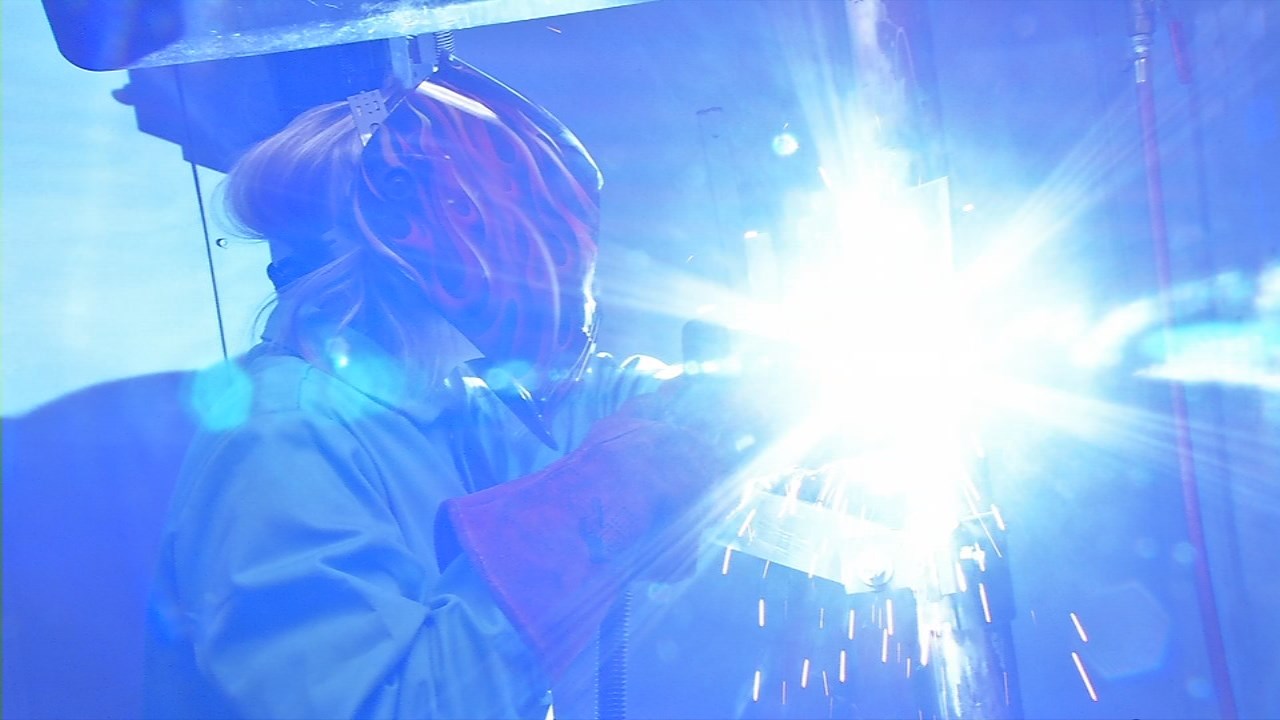 MADISON, In. (WDRB) — It’s winter break at the Ivy Tech campus in Madison, Indiana, but a group of women are crowded into a classroom learning the basics of welding, an in-demand trade that could mean a high-paying job.

“We’re in dire need of it. You look at all of our bridges, that type of stuff. Most of them are deficient, which means they need repairs,” said Steve Lawyer who teaches the class.

Students, like Leslie Hauk, are eager to learn. “It’s challenging and it’s very rewarding, and I’m real excited about trying to get a job in the field,” said Hauk.

She’ll have to wait a little longer before she can put those skills to work. She won’t be released from the Madison Correctional Facility until November 2018. It’ll be her first taste of freedom in 23 years. “As a young person I was kind of a reckless youth, and I got involved in a crowd and a lifestyle full of bad choices and it was a perfect storm for a disaster,” she said.

With her release from prison fast approaching, Hauk is ready for work release and a fresh start. “I don’t want to be defined by my past. I want someone to give me a chance and through this program, the people have already given me a chance,” said Hauk.

The creation of this program was perfect timing for Hauk and the other nine soon-to-be-released prisoners learning to weld. The Indiana Department of Corrections launched the program last month through a partnership with Ivy Tech.

“We hope that by piloting these programs and showing that model that other people will follow suit,” said Paula Clark.

The intensive 80-hour course is run under the watchful eye of Steve Lawyer, a former deputy sheriff who now teaches welding.

“They’ve paid for whatever they’ve done  and now they’re trying to make it right and I’m happy for them,” said Clark.

For seven hours a day, the women light up their torches fusing together molten pieces of metal.

“I never would have thought that I could make anything let alone put a weld together. I surprise myself every day!” said Samantha Ashcraft, an inmate who has been serving four years.

The skills can pay off through jobs in construction and manufacturing.

“Give them some skills and some confidence that helps prevent them from coming back and that’s what we want,” said Lawyer.

In 2016, 27 percent of women released from Indiana prisons re-offended. Trouble finding adequate work could mean returning to a life of crime.

“We’re prepared and we have skills, but if we don’t have an opportunity and a realistic way to hit the ground running, the challenges can be overwhelming,” said Hauk.

Here, these women can perfect their welding skills and find good paying jobs outside the prison walls.

“I definitely hope that it will open up doors for me, opportunity, possibly a career,” said Ashcraft.

At the end of the three weeks, students will earn a certificate from the American Welding Society. Then it’s off to work release to perfect those skills and hopefully a job will follow. Their welding abilities will only take them so far though. It’s the confidence they’re building that will make or break life outside lockup.

“It makes me feel like I can do this, and I don’t need to depend on anyone. I can do it on my own,” said Ashcraft.

The women will take their final exam on January 16.